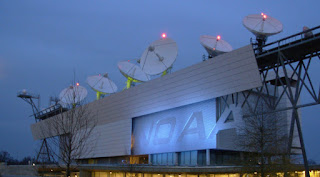 WASHINGTON — Just over a week after the House stiffed the program entirely, Senate appropriators proposed providing less than half the funding requested in 2016 for the next generation of U.S. polar-orbiting weather satellites. The Senate Appropriations Committee on June 11 approved a $5.4 billion budget for the National Oceanic and Atmospheric Administration, including $135 million for the final three satellites in the weather agency’s Joint Polar Satellite System (JPSS) line: JPSS-3, JPSS-4, and a small polar-orbiter to back up the larger spacecraft. The White House’s 2016 budget request, released in February, sought $380 million for these spacecraft in 2016 as part of a new program called Polar Follow-on. This is NOAA’s plan for maintaining global weather coverage through 2038. 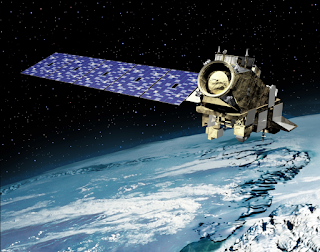 Both the House and Senate bills would provide the roughly $810 million NOAA requested for JPSS-1 and JPSS-2, which are designed to maintain coverage through 2025. JPSS-2 (concept art pictured here) is the last satellite in the JPSS that is fully funded in both the House and Senate versions of the 2016 NOAA spending bill. Credit: Orbital ATK. Where the House’s proposed 2016 NOAA budget amounts to a thumbs down for the administration’s plan for future JPSS satellites, the Senate’s proposal is at least a firm maybe. In a report accompanying the bill, Senate appropriators said continuing polar-orbit coverage is “essential” and directed NOAA to get an independent cost estimate for the Polar Follow-on program. The report would be due six months after the bill becomes law — which may never happen, as Senate Democrats have signaled they may block consideration of spending bills on the floor. Sen. Barbara Mikulski (D-Md.), ranking member of the Senate Appropriations Committee, tried during the bill’s markup to bring Polar Follow-on funding in line with NOAAs’s request, but her amendment was voted down. Congressional Republicans have refused to increase spending above the caps established in the Budget Control Act of 2011. The White House has not yet weighed in on the Senate bill, but threatened to veto the House version June 1. NOAA’s current polar orbiter, Suomi-NPP, launched on a five-year mission in 2011. JPSS-1, essentially a clone of Suomi-NPP, is set to take over as the go-to civilian polar satellite in 2017.  Ball Aerospace and Technologies Corp. of Boulder, Colorado, built Suomi-NPP and is building JPSS-1. NASA, which manages procurement of NOAA’s weather satellites, in April awarded Orbital ATK, Dulles, Virginia, a contract worth up to $470 million to build JPSS-2, JPSS-3 and JPSS-4. Ball immediately protested NASA’s decision, prompting NASA to stop work on JPSS-2, the only firm order on the contract. Ball’s protest challenges NASA’s decision to award the contract based on what the company contends is an unrealistic price tag, especially for the second and third satellites. The Government Accountability Office has until July 16 to rule on the protest. The Senate bill also follows the House’s lead in fully funding NOAA’s other marquee satellite program, the Geostationary Operational Environmental Satellite (GOES)-R series. Four GOES-R satellites being built by Lockheed Martin Space Systems of Denver will continue coverage of U.S. coastlines from geostationary orbit through 2036. The first is scheduled to launch by March 31. The $10 million provided in the Senate bill would fund only the first batch of six satellites set to launch to a 24-degree low Earth orbit next year. “[N]o funding is provided for the procurement of a second set of radio occultation sensors that NOAA proposes to launch into polar orbit in 2019,” the report accompanying the bill said. Peggy Hodge, a spokeswoman for the Air Force’s Space and Missile Systems Center in Los Angeles, did not immediately reply to a request for comment June 15. Finally, the Senate bill denies NOAA’s $2.5 million request to study the Space Weather Follow-on, a planned successor to the Deep Space Climate Observatory that launched in February. Space weather refers to charged particles that erupt from the surface of the sun and can short out circuits in satellites, or even on Earth’s surface.
Автор: Jackkat на 8:16 AM