Arianespace has successfully launched four additional O3b satellites for the constellation operated by SES Networks. The launch took place on Friday, March 9 at 2:10 pm (local time) from the Guiana Space Center (CSG), Europe's Spaceport in French Guiana (South America).This mission was the second of the year for Arianespace, the first in 2018 using a Soyuz rocket and the second launch since January for the global operator SES. With this fourth launch for O3b fleet since 2013, all 16 spacecraft in the current O3b constellation have been orbited by Arianespace. With this latest mission, Arianespace has demonstrated that its family of launchers is extremely well suited to the deployment of communications, navigation and Earth observation satellite systems. This mission was the fourth for the O3b satellite fleet operated by global operator SES, following three previous launches to orbit the constellation's first 12 satellites performed on June 25, 2013, July 10, 2014 and December 18, 2014. With this latest successful launch of four more O3b satellites, Arianespace supports SES Networks' continued development of its constellation, which started commercial service in September 2014. 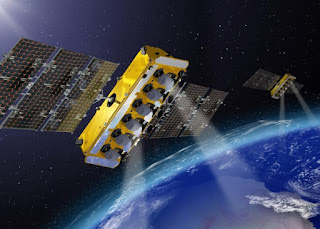 By expanding its O3b fleet, SES will be able to offer 38% more capacity worldwide, and extend its potential market from 45 to 50 degrees north and south latitude.

Arianespace will launch four more O3b satellites into Medium Earth Orbit for this constellation in 2019.

Arianespace launches 57 satellites for SES in a 30-year partnership

SES, a world-leading satellite operator, is the first to deliver a differentiated and scalable GEO-MEO offering worldwide, with more than 50 satellites in geostationary Earth orbit (GEO) and 12 satellites in Medium Earth Orbit (MEO).

Arianespace and SES have developed an exceptional partnership over the last 30 years, made even stronger by this latest successful launch. Because of its versatile and complementary family of launchers, Arianespace is perfectly suited to address SES's GEO/MEO strategy and the requirements of its future programs.

With its current family of launchers (Ariane 5, Soyuz and Vega) and its future family (Ariane 6 and Vega C), Arianespace enjoys an excellent position in the growth market of satellite constellations, whether for navigation, telecommunications or Earth observation; and for initial deployment, as well as subsequent replacement launches. 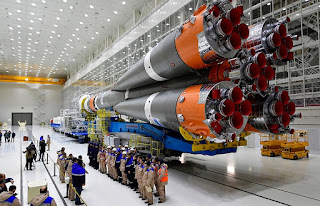 Right from its service entry in 2020, Ariane 6 will offer three major advantages for constellations: larger payload capacity, a restartable Vinci upper stage engine, and the Auxiliary Power Unit (APU), allowing the sequential release of satellites to prevent any collisions.

To address the specific needs of constellations with small satellites (0-400 kg.) - primarily for Earth observation - two multiple launch systems for Ariane 6 and Vega C are now being developed with the European Space Agency and the European Commission.

Shortly after the official announcement of the orbital injection of the O3b satellites on Flight VS18 mission, Stephane Israel, CEO of Arianespace, said: "With this second launch of the year, and the first by Soyuz, Arianespace is proud to help its long-standing customer SES meet its ambitious goals, for the second time in 2018. We are honored by the renewed confidence placed in us by SES, for whom we have launched 57 satellites since 1988, including the entire O3b constellation. I also would like to congratulate Thales Alenia Space, another loyal partner, which built all four O3b satellites. I would like to thank the Russian space agency Roscosmos for their commitment to our partnership based on Soyuz. My thanks go as well to CNES/CSG, our ground segment partners and all employees at the launch base, who continue to support us as we go from success to success. And of course, congratulations to all Arianespace staff, for this 18th Soyuz launch from CSG."
Автор: Jackkat на 2:31 PM