If we could travel halfway across the Universe, we would find a huge star,christened Icarus, that was found after its discovery to be the most distant star from Earth. Normally, it would be impossible to detect it, even using the most powerful telescopes currently available, were it not for a quirk of nature that had amplified its brightness such that it could be detected with the Hubble Space Telescope. The discovery has also helped to test a new theory of dark matter and to study what clusters of galaxies are made of. The results of this study were published today in the journal Nature Astronomy. Icarus is located in a spiral galaxy that is so far from Earth that its light has taken 9000 million years to reach us. According to Patrick Kelly, a researcher from the University of Minnesota and leader of the team, 'This is the first time we've seen an individual star so far away. We can see very distant galaxies, but this star is a hundred times more distant than the next farthest star that we can observe, unless we include supernova explosions as stars.' The cosmic quirk that has allowed us to see this star is a phenomenon known as 'gravitational lensing'. 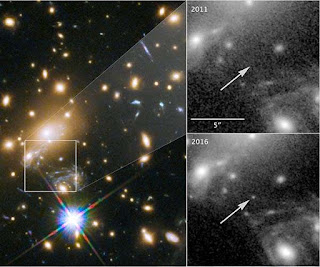 The gravity of an extremely massive cluster of galaxies acts like a giant cosmic magnifying glass that amplifies the light from the most distant objects. The gravitational lens that has enabled us to see Icarus is created by the galaxy cluster known as MACS J1149+2223, located some 5000 million light years from Earth. Combining this lens with Hubble's resolution and sensitivity has enabled an analysis to be performed of this distant star.

The research team that has participated in this study includes, among other workers, Jose M. Diego of the Instituto de Fisica de Cantabria (IFCA), Steven Rodney of the University of South Carolina, Columbia (USA), Pablo G. Perez Gonzalez of the Universidad Complutense de Madrid (UCM), Tom Broadhurst of the University of the Pais Vasco (UPV), and Ismael Perez Fournon (IAC and ULL). Patrick Kelly and his coworkers detected sudden changes in the star's brightness, produced by the microlens brought about by the gravitationaleffect of stars belonging to the cluster.

Although its official designation is 'MACS J1149+2223 Lensed Star 1', the team decided to name the star after the character in Greek mythology who flew too close to the Sun with wings and feathers made of wax. Just like Icarus, the light from this star, on its journey towards Earth, passed so close to a Sun-like star in the intergalactic region of the MACS J1149+2223 cluster that its brightness was amplified by a factor of about 2000, thus attaining the glory of its Greek namesake.

'We were able to establish that Icarus is a blue supergiant star, a type of star that is much bigger, more massive, hotter and possibly thousands of times brighter than the Sun. But, at its great distance, it would be impossible to observe it as an individual star, even with the Hubble, were it not for the gravitational lens phenomenon,' comments Ismael Perez Fournon.

Pablo Perez Gonzalez (UCM) explains, 'Until 2016 is was only possible to observe individual stars in galaxies close to the Milky Way. Today, we are witnessing an individual star, very like Rigel, which is halfway across the Universe, and which, indeed, no longer exists.'

The detection of Icarus with the Hubble was so extraordinary that, when it was discovered, telescopes worldwide started to observe it. In Spain, special observing time was applied for on the Gran Telescopio Canarias (GTC), the largest optical-infrared telescope in the world. It turned out, according to Perez Gonzalez, that the GTC 'was the only telescope to detect this star so distant from Earth, given that Icarus is so faint.'

The discovery of Icarus is exceptional not only in terms of the detection of such a distant star. Detecting the amplification of an individual star's brightness enables us to study the nature of the cluster's dark matter content, thus putting to the test a theory of the nature of the dark matter of the cluster that shows that most of it is in the form of primordial black holes.

According to Jose M. Diego (IFCA), first author of the theoretical paper accompanying the Nature Astronomy article, 'If the dark matter consisted of black holes similar to those detected by LIGO (Laser Interferometer Gravitational-Wave Observatory), the signal observed from Icarus would have been very different, which enables us to discard these types of candidates.' Tome Broadhurst (UPV) adds, 'this type of study will in future enable us to set limits on other dark matter models, such as those that postulate superlight particles of matter and their quantum effects.'

Also, in May 2016, another image appeared next to Icarus that seems to suggest that we are not dealing with an individual star. We could instead be talking about a binary system, with two stars in orbit around each other.
Автор: Jackkat на 6:10 AM