The Aerospace Corporation (Aerospace) announced details of a new small satellite (smallsat) standard called a Launch Unit (Launch-U) during a briefing at the Small Satellite Conference in Logan, Utah. This standard provides major benefits to the smallsat industry-manufacturers, launch providers, and satellite users-by increasing access to space and decreasing launch costs. It also enables the space community to come together to work innovative solutions for sharing costs, adopting new business models, and adapting to regulatory or statutory changes. "We are proud to partner with industry, government, and academia to develop the first official Launch Unit standard," said Steve Isakowitz, Aerospace president and CEO. "The Launch-U team's efforts will help reduce the complexities on the satellite and launch vehicle sides. It will also lead to shorter integration timelines and increased access to space." The space community was in search of a standard to make launching small satellites more flexible. Given Aerospace's role as an objective technical advisor, the community identified the corporation as the ideal partner to work across all elements of the space enterprise, from satellite and launch manufacturers to service providers and government officials. 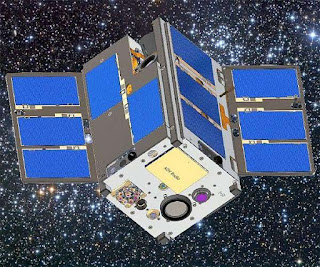 "The Launch-U concept was born out of the industry's continuous requests for help, said Dr. Randy Villahermosa, general manager of Aerospace's Innovation Initiatives. "The goal was to create a standard that industry would view as enabling rather than an impediment to growth. Aerospace was a key broker in making this a reality."

Carrie O'Quinn, senior project engineer for Aerospace's Research and Development Department and the Launch-U lead, emphasized that currently there are no industry standards for satellites between the size of a CubeSat (approximately the size of a toaster) and an EELV Secondary Payload Adapter (ESPA) class satellite, which is about the size of a large dorm refrigerator.

"The Launch-U standard seeks to change this through our volume recommendation of 45 cm x 45 cm x 60 cm, said O'Quinn. "That's roughly the size of two carry-on bags strapped together. We also address a mass range, fundamental frequency, and loads in the recommendations."

The space access industry is altering in an exceedingly rapid pace and is driven by smallsat and small launch vehicle development, the increasing popularity of multi-manifest missions, and a widespread interest in reducing launch cost and timelines while deploying even more spacecraft. Currently, industry experts estimate that 6,000 to 20,000 smallsats could be launched over the next 10 years.

O'Quinn explained that the group's vision for the Launch-U standard is the solution the industry is looking for. "This is not envisioned to be a requirement levied on spacecraft developers, but rather a standard that is embraced by all as a game-changer."

For industry, the next step is to develop hardware and other technical solutions needed to support the Launch-U. O'Quinn emphasized that each stakeholder plays a specific role in implementing the Launch-U.

"Launch vehicle providers, integrators, and aggregators can begin considering how Launch-U satellites will affect their business models once implemented," said O'Quinn. "For example, these companies might publish information on Launch-U launch costs, as Spaceflight Industries and other commercial entities currently do for CubeSat launch costs."

Satellite manufacturers could also build to the Launch-U standard and make it available to the community at large.
Автор: Jackkat на 11:36 AM