Europe’s gravitational-wave hunters are celebrating. On July 1, a satellite will wrap up its mission to test technology for the pioneering quest to measure gravitational ripples in the stillness of space. Over the past year, the craft has performed much better than many had hoped. That success has convinced the European Space Agency (ESA) to give the go-ahead to a full-scale version able to sense cataclysmic events that can’t be felt on Earth. The LISA Pathfinder mission, launched in late 2015, beat its precision target by a factor of 1,000 and quieted critics who have doubted its potential, says project scientist Paul McNamara, an astrophysicist at ESA in Noordwijk, the Netherlands. “This is not the impossible task that some people believed it was.” Currently set to fly in 2034, the full-scale Laser Interferometer Space Antenna (LISA) will be the space analogue of the Laser Interfero-meter Gravitational-Wave Observatory (LIGO), two machines in the United States—each with a pair of 4-kilometre-long arms—that first detected the ripples by ‘hearing’ the merger of two black holes. 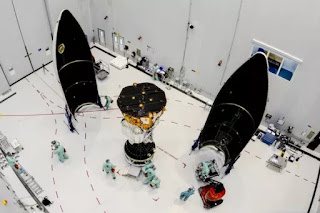 LISA Pathfinder—shown before being encapsulated into a rocket for launch—allowed scientists to test technology for detecting gravitational waves.

LISA’s three probes will fly in a triangle, millions of kilometres apart, making the mission sensitive to much longer gravitational waves, such as the ripples produced by the collisions of even larger black holes.


The mission will bounce laser beams between the three LISA craft—or, more precisely, between test masses suspended in a vacuum inside each satellite. Taking advantage of the vibration-free conditions of space, it will measure tiny variations in the distances between the test masses that reveal the passage of space-warping gravitational waves.

LISA Pathfinder’s goal was to show that such variations could be measured in zero gravity and with a precision of one pico-metre, or one-billionth of a millimetre. High-precision thrusters adjusted Pathfinder’s route so that it would closely follow the gravitational free fall of two test masses inside the craft and not interfere with their orbit. At the same time, the probe bounced a laser beam between the two masses—a pair of 2-kilogram cubes made of a gold and platinum alloy—and measured fluctuations in their separation. 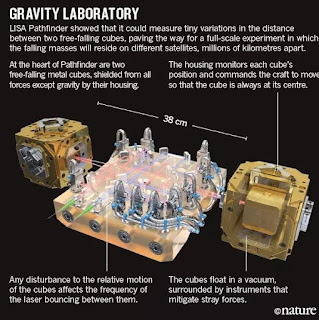 The €400-million (US$447-million) probe was declared a success in February 2016, two weeks after LIGO announced its first detection. Pathfinder did not detect gravitational waves—which would not have appreciable effects over the short distance inside the probe—but it showed that it could detect motions 100 times smaller than the pico-metre requirement. Since then, the experiment’s performance has improved by another order of magnitude (M. Armano et al. Phys. Rev. Lett. 118,171101; 2017).

By early June this year, LISA Pathfinder had almost run out of thruster fuel, and mission control used what was left to nudge the spacecraft out of its operating orbit and into its final orbit around the Sun. On 1 July, Pathfinder will stop collecting data, and the spacecraft will be put to sleep for good on 18 July.

Pathfinder was “a triumph”, says William Klipstein, a physicist at NASA’s Jet Propulsion Laboratory in Pasadena, California, who works on LISA development but was not involved in ESA’s Pathfinder mission. Its performance “removes the last major technical barrier for proceeding with a long-planned ESA-led gravitational-wave mission”, he says.

In a unanimous decision on June 20, ESA’s Science Programme Committee officially selected LISA as the third of the agency’s large, or €1-billion-class, mission in its current science programme. The approval was long-awaited but had been in little doubt after Pathfinder’s success and LIGO’s gravitational-wave discoveries, says Karsten Danzmann, a director of the Max Planck Institute for Gravitational Physics in Hanover, Germany, and Pathfinder’s co-principal investigator.


The decision is not final, but it means that industrial partners will now be involved in detailed design and cost projections. Once those are finished, ESA will decide whether to ‘adopt’ the mission and commit the funding to build it. The United States—which was an equal partner in the mission until 2011, when it reduced its participation to save costs—is expected to provide important components.

ESA has chosen two other large missions to go ahead before LISA—one to the moons of Jupiter, slated to launch in 2022, and an X-ray observatory for 2028. This puts LISA on schedule to be launched in 2034. But Pathfinder principal investigator Stefano Vitale, a physicist at the University of Trento in Italy, and others hope that its schedule can be accelerated. ESA’s call for proposals to lead the gravitational-wave observatory—won by Vitale’s team—was put out in late 2016, instead of late 2019 as the agency had planned. Vitale and other gravitational-wave researchers hope the agency will push the launch date forward so that LISA can start sending back data before too many of the current key researchers have retired.
Автор: Jackkat на 12:50 PM No comments:

By combining the power of a "natural lens" in space with the capability of NASA's Hubble Space Telescope, astronomers made a surprising discovery—the first example of a compact yet massive, fast-spinning, disk-shaped galaxy that stopped making stars only a few billion years after the big bang. Finding such a galaxy early in the history of the universe challenges the current understanding of how massive galaxies form and evolve, say researchers. When Hubble photographed the galaxy, astronomers expected to see a chaotic ball of stars formed through galaxies merging together. Instead, they saw evidence that the stars were born in a pancake-shaped disk. 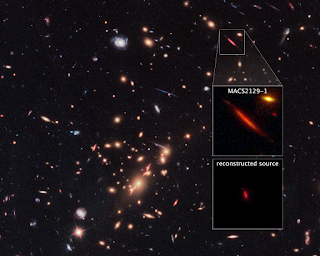 Acting as a “natural telescope” in space, the gravity of the extremely massive foreground galaxy cluster MACS J2129-0741 magnifies, brightens, and distorts the far-distant background galaxy MACS2129-1, shown in the top box. The middle box is a blown-up view of the gravitationally lensed galaxy. In the bottom box is a reconstructed image, based on modeling that shows what the galaxy would look like if the galaxy cluster were not present. The galaxy appears red because it is so distant that its light is shifted into the red part of the spectrum.
Credits: NASA, ESA, S. Toft (University of Copenhagen), M. Postman (STScI), and the CLASH team

This is the first direct observational evidence that at least some of the earliest so-called "dead" galaxies — where star formation stopped — somehow evolve from a Milky Way-shaped disk into the giant elliptical galaxies we see today.

This is a surprise because elliptical galaxies contain older stars, while spiral galaxies typically contain younger blue stars. At least some of these early "dead" disk galaxies must have gone through major makeovers. They not only changed their structure, but also the motions of their stars to make a shape of an elliptical galaxy.

"This new insight may force us to rethink the whole cosmological context of how galaxies burn out early on and evolve into local elliptical-shaped galaxies," said study leader Sune Toft of the Dark Cosmology Center at the Niels Bohr Institute, University of Copenhagen, Denmark. "Perhaps we have been blind to the fact that early "dead" galaxies could in fact be disks, simply because we haven't been able to resolve them."

This artist's concept shows what the young, dead, disk galaxy MACS2129-1, right, would look like when compared with the Milky Way galaxy, left. Although three times as massive as the Milky Way, it is only half the size. MACS2129-1 is also spinning more than twice as fast as the Milky Way. Note that regions of Milky Way are blue from bursts of star formation, while the young, dead galaxy is yellow, signifying an older star population and no new star birth.
Credits: NASA, ESA, and Z. Levy (STScI)

Previous studies of distant dead galaxies have assumed that their structure is similar to the local elliptical galaxies they will evolve into. Confirming this assumption in principle requires more powerful space telescopes than are currently available.

However, through the phenomenon known as "gravitational lensing," a massive, foreground cluster of galaxies acts as a natural "zoom lens" in space by magnifying and stretching images of far more distant background galaxies. By joining this natural lens with the resolving power of Hubble, scientists were able to see into the center of the dead galaxy.

The remote galaxy is three times as massive as the Milky Way but only half the size. Rotational velocity measurements made with the European Southern Observatory's Very Large Telescope (VLT) showed that the disk galaxy is spinning more than twice as fast as the Milky Way.

Using archival data from the Cluster Lensing And Supernova survey with Hubble (CLASH), Toft and his team were able to determine the stellar mass, star-formation rate, and the ages of the stars.

Why this galaxy stopped forming stars is still unknown. It may be the result of an active galactic nucleus, where energy is gushing from a supermassive black hole. This energy inhibits star formation by heating the gas or expelling it from the galaxy. Or it may be the result of the cold gas streaming onto the galaxy being rapidly compressed and heated up, preventing it from cooling down into star-forming clouds in the galaxy's center.

But how do these young, massive, compact disks evolve into the elliptical galaxies we see in the present-day universe? "Probably through mergers," Toft said. "If these galaxies grow through merging with minor companions, and these minor companions come in large numbers and from all sorts of different angles onto the galaxy, this would eventually randomize the orbits of stars in the galaxies. You could also imagine major mergers. This would definitely also destroy the ordered motion of the stars."

The findings are published in the June 22 issue of the journal Nature. Toft and his team hope to use NASA's upcoming James Webb Space Telescope to look for a larger sample of such galaxies.

The Hubble Space Telescope is a project of international cooperation between NASA and ESA (European Space Agency). NASA's Goddard Space Flight Center in Greenbelt, Maryland, manages the telescope. The Space Telescope Science Institute (STScI) in Baltimore, Maryland, conducts Hubble science operations. STScI is operated for NASA by the Association of Universities for Research in Astronomy, Inc., in Washington, D.C.

The Very Large Telescope is a telescope facility operated by the European Southern Observatory on Cerro Paranal in the Atacama Desert of Northern Chile.
Автор: Jackkat на 3:06 AM No comments: