Portugal is developing the infrastructure for a national spaceport on one of the islands of the Azores archipelago, Santa Maria, a European launch and landing location for small satellites. As an ESA Member State, Portugal has requested ESA's tailored expertise and technical assistance in an agreement signed on 21 June by ESA Director General Jan Worner and Manuel Heitor, Minister for Science, Technology and Higher Education.Within its purpose, ESA provides assistance to its Member States for national activities. Portugal will benefit from ESA's leading technical and programmatic expertise in managing launch base development and ground infrastructures, related services, and testing as well as in the application of specific legal frameworks for national spaceports. Portugal Space will retain overall technical and financial responsibility for request and use of ESA expertise. There is a growing demand for launches of small satellites on microlaunchers. As Member States respond to these market needs, ESA intends to lend support to those Member States requesting it, in the domain of spaceports and test infrastructures under their jurisdiction as well as related services. This ESA assistance to Member States is further defined as part of the Commercial Space Transportation Services and Support programme proposed for decision at Space19+ in November. 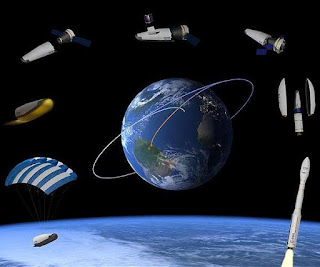 In 2022, ESA could make use of the Azores landing location for its Space Rider lifting body, which will serve as a laboratory platform in space for extended periods and return to Earth with its cargo. The Azores landing base would be suitable as it allows Space Rider to return at the same latitude as its operational orbit, requiring fewer deorbiting manoeuvres.
Автор: Jackkat на 11:13 AM No comments:

Arianespace confirms its status as a trusted partner to world-class operators of communications satellites with the launch of T-16 and EUTELSAT 7C. The company's fifth launch of 2019 took place on Thursday, June 20 at 6:43 pm (local time) from the Guiana Space Center (CSG), Europe's Spaceport in Kourou, French Guiana. With this latest success, the second with an Ariane 5 launch vehicle in 2019, Arianespace consolidates its leadership in the market for commercial launches into geostationary orbit. This launch was the 104th overall for an Ariane 5 and the 310th launch by the Arianespace family. Following the launch, Stephane Israel, Chief Executive Officer of Arianespace, said: "I would like to thank our two loyal customers for entrusting us with the launch of their T-16 and EUTELSAT 7C satellites. This second Ariane 5 launch of the year reaffirms the reliability of our heavy-lift launcher and its leadership in the geostationary market. We are very proud to count 24 GEO satellites in our order book. Some of them will be launched by Ariane 6, the new-generation launch vehicles scheduled to make its first flight in 2020."Arianespace supports two world leaders in satellite communications - EUTELSAT 7C is the 33rd satellite to be launched by Arianespace for Eutelsat. With this latest launch, Arianespace continues to bolster its exceptional partnership with Eutelsat, a relationship that reaches back to 1983. More than half of the operator's satellites to date have been orbited by Arianespace. This relationship is set to continue, since Arianespace's backlog includes seven more Eutelsat satellites, to be orbited by Ariane 5 and Ariane 6. 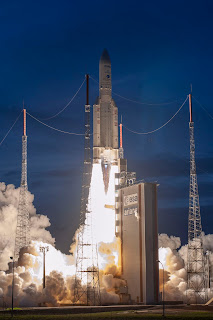 Built by Maxar Technologies, EUTELSAT 7C is a high-power broadcast satellite for markets in Africa, Europe, the Middle East and Turkey. By significantly increasing power over Sub-Saharan Africa, it will make room for several hundred additional digital channels to support the region's rapidly expanding television market.

Arianespace has 21 more Airbus satellites in its launch backlog.
Автор: Jackkat на 4:54 AM No comments:

NewSpace is a recently formed movement and philosophy that encompasses a globally emerging private spaceflight industry. This term is generally used in connection with a global private sector of new aerospace companies and ventures. One primary objective is to develop faster, better and cheaper access to space and spaceflight technologies. This movement is thought to be a major driving force in the growing near-Earth space commerce market. The increased traffic from the soon-to-be-launched 15,000 new satellites will have some unexpected consequences. One expected consequence is the demise of the sun-synchronous family of orbits. A sun-synchronous orbit (SSO) is one of the most frequently used orbits for Earth-science and national security missions. SSOs are near-polar orbits whose ascending nodes precess at a rate that is matched to the Earth's mean orbital rate around the sun, i. e., about one degree per day. This motion allows the maintenance of the orbit's geometry with respect to the sun such that solar lighting along the SSO satellite's ground track remains approximately the same over the mission's duration. Thanks to the Earth's asymmetrical gravity field, a natural force is exerted on these orbits that results in precessional motion that assures a constant sun angle as each SSO satellite passes over the Earth's surface. The figure illustrates the relationship between SSO inclination and altitude for circular orbits. For example, one SSO satellite at 800 km altitude would have to have an inclination of 98.6 degrees in order to maintain a constant sun angle with the orbit. 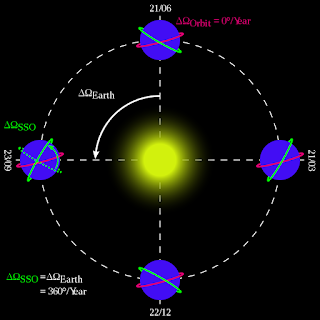 SSOs have been used for more than 50 years. One result of this is the accumulation of a large population of resident space objects (RSO) consisting of active satellites, expired satellites, discarded rocket bodies and many other debris objects.

Thus, the orbital belt between 700 and 900 km altitude is the zone of highest debris population and is becoming so congested that flight threats in this region are approaching critical levels. Without a solution to the growing population of expired satellites, old rockets and other debris, the safe use of SSOs will soon become impossible.

While SSO surveillance satellites have the advantage of photographing ground structures over and over with the same lighting conditions, and making the job of photo analysts relatively easy, SSO missions will have to be discontinued. Such orbits are actually dinosaurs in the age of virtual reality, data analytics, high-speed data transmission and other recently developed technologies.

Such constellations can avoid most debris and adversarial threats, resulting in a highly resilient and hard-to-jam national security system. This is the kind of project also seems highly suitable for development by the new Space Development Agency (SDA).
Автор: Jackkat на 11:24 AM No comments: