140 successful tests and several "firsts" for Vinci, the engine for Ariane 6

The re-ignitable Vinci, engine, which will power the upper stage of the Ariane 6 launcher, has now successfully completed its last two subsystems qualification campaigns (M6 and M7) with 140 engine tests conducted.The tests in campaigns M6 and M7, vital for qualification of the engine subsystems, were carried out on the PF52 bench at the ArianeGroup site in Vernon, France, and on the German Aerospace Center DLR's P4.1 bench in Lampoldshausen, Germany. A total of 25 tests (16 for M6 and 9 for M7) were carried out under nominal conditions, and include three major performance "firsts":

- a series of 20 successful boosts (1 ignition followed by 19 engine re-ignitions), totaling an operating duration of 300 seconds,

- a continuous burn of 800 seconds in "high operation", i.e. at the maximum thrust for which the engine is designed. 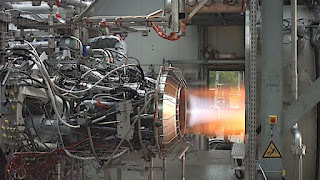 The purpose of these tests was also to test the Vinci engine beyond its operational requirements, as it will only require ignition a maximum of 4 times during its missions, with a maximum burn time of 900 seconds in flight.

Valerie de Korver, Product Manager Vinci Propulsion System at ArianeGroup, said: "These campaigns went particularly smoothly and we demonstrated considerable margins with respect to the flight requirements, in particular thanks to a new ignition system and we successfully achieved a number of firsts, such as performing 20 boosts in a single test.

"This is a major step in demonstrating the ability of the Vinci engine to meet the versatility demands of the Ariane 6 launcher. It is also a new and major milestone for the program and for the teams, who are well aware of the challenges faced in these campaigns and who are always intensely committed to ensuring their success."

The Vinci engine was developed by ArianeGroup for Ariane 6 and provides the future European launcher with extreme versatility. Its main feature is its multiple ignition capability: Vinci will be able to re-ignite in flight as many times as necessary, in order to place several payloads in orbit at different locations, according to the specific needs of the mission.

This engine will enable Ariane 6 to carry out all types of missions, regardless of duration and target orbit, particularly the deployment of satellite constellations, for which demand will continue to grow.

Ariane 6 engine testing is continuing apace. This further success follows on from the first successful test on 13 January in Lampoldshausen, Germany, of the Vulcain 2.1 engine which will power the launcher's main stage. These tests enabled the engine to be tested throughout its flight envelope, whether in terms of thrust, mix ratio, or propellant supply conditions.

Design authority and industrial lead contractor for the development and operation of the Ariane 6 launcher on behalf of the European Space Agency (ESA), ArianeGroup coordinates an industrial network of more than 600 companies in 13 European countries, including more than 350 Small and Medium Enterprises (SMEs).
Автор: Jackkat на 1:14 PM