The UK is set to build on its world leading expertise in aerospace with the development of vertical and horizontal spaceports. Business Secretary Greg Clark will today (Monday 16 July) launch the start of a Great British Space Age that will see vertically-launched space rockets and satellites take off from a new spaceport at Sutherland on the north coast of Scotland. The Government is also making available a new 2 million pound fund to boost further horizontal launch spaceport sites across Britain - such as Newquay, Glasgow Prestwick and Snowdonia - subject to business case. Business Secretary Greg Clark said: "As a nation of innovators and entrepreneurs, we want Britain to be the first place in mainland Europe to launch satellites as part of our Industrial Strategy. The UK's thriving space industry, research community and aerospace supply chain put the UK in a leading position to develop both vertical and horizontal launch sites. "This will build on our global reputation for manufacturing small satellites and help the whole country capitalise on the huge potential of the commercial space age." Initial funding of 2.5 million pounds will go to Highlands and Islands Enterprise to develop the vertical launch site in Sutherland which could see lift-off from the early 2020s and create hundreds of jobs. It will use innovative rocket technology to pave the way for a world-leading spaceflight market in Britain. 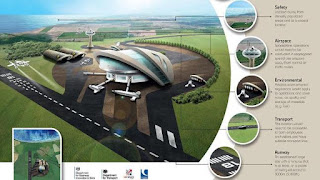 The UK Space Agency selected the Sutherland site because Scotland is the best place in the UK to reach highly sought-after satellite orbits with vertically-launched rockets.

Horizontal launch sites have potential to play a key role in the UK's future spaceflight market. Sites such as Newquay, Glasgow Prestwick and Snowdonia will be boosted by a new 2m pound fund to grow their sub-orbital flight, satellite launch and spaceplane ambitions.

Secretary of State for Transport Chris Grayling said: "The space sector is an important player in the UK's economy and our recent Space Industry Act has unlocked the potential for hundreds of new jobs and billions of revenue for British business across the country.

"Today's announcement is exciting for places like Newquay in Cornwall too, paving the way for further potential space ports in the future."

The commercial space sector is estimated to be worth a potential 3.8 billion pounds to the UK economy over the next decade and will support Britain's modern Industrial Strategy by creating high-skilled jobs and boosting local economies.

Secretary of State for Wales Alun Cairns said: "The UK Government has an exciting ambition to take the UK into the commercial space age by enabling small satellite launch and spaceflight from UK spaceports. Wales now has an exciting window of opportunity to take a leading role in shaping that future.

"We have the right geography and a skilled engineering base in aerospace, electronics and the software industries, standing ready to diversify and to flourish in the fast-developing space market.

"The opportunities are vast - for Britain's strategic capabilities and for Wales in terms of job creation, cross border synergies through the Northern Powerhouse, linking to our strong academic institutions and the potential economic impact. We must now stand ready to grasp them."

Graham Turnock, Chief Executive of the UK Space Agency, said: "This spaceport grant will help kick-start an exciting new era for the UK space industry, and this is only the beginning of our LaunchUK campaign. We are committed to supporting a commercial market for access to space in the UK, and we will continue to engage with any company who seeks to operate here."

Charlotte Wright, Chief Executive of Highlands and Islands Enterprise (HIE), said: "The decision to support the UK's first spaceport in Sutherland is tremendous news for our region and for Scotland as a whole. The international space sector is growing and we want to ensure the region is ready to reap the economic benefits that will be generated from this fantastic opportunity."

Will Whitehorn, Non-Executive Chairman of Clyde Space, said: "From designing and building the very first satellite in Scotland, Clyde Space has grown and become a front runner in small-satellite manufacturing. Having a spaceport located in Scotland will bring about a whole host of commercial advantages and not only to our operations in Glasgow, but to the entire space sector in the whole of the UK."

Peter Platzer, CEO of Spire Global, said: "A spaceport in Scotland and the UK is fantastic news! Launch continues to be the most unpredictable part of the overall supply chain, with delays, often for months and sometimes years, being the norm.

"In Spire, Scotland already sports Europe's most advanced and prolific satellite manufacturing capability, and with a space port right next door, enabling clockwork like launches, we can finally get our space sector supply chain to be truly integrated!"
Автор: Jackkat на 11:35 AM