Advanced Rockets Corporation has been granted a patent for the Advanced Rockets Vehicle (ARV) system design. The main technological breakthrough highlighted in this patent is the ability to operate within the atmosphere for prolonged periods of time and at very high Mach numbers; Sustained Hypersonic Flight. Othniel Mbamalu, President of Advanced Rockets Corporation, has stated, "the implications of this achievement are enormous across all of aerospace, enabling previously impossible applications and operational flight profiles." He continued with, "One of the biggest problems associated with flying at high speeds within the atmosphere is the associated extreme drag and aerodynamic heating. Our patent solves these problems and expands the possibilities of sustained atmospheric hypersonic flight." A major goal of launch systems and most aerospace programs is improving performance and reducing the cost of access. The technologies featured in this patent achieves this. The ARV patent offers a novel mix of unique processes, techniques and architecture. 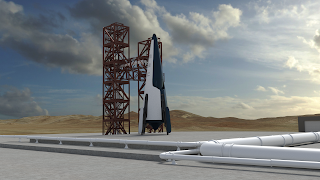 The Advanced Rockets Vehicle (ARV) is designed to take advantage of the entire complement of the solutions identified in the patent in a single vehicle platform, although elements from the ARV design could also be applied to other operational launch vehicles and high-velocity projectiles.

ARV's operational performance is aided by its design architecture that permits very low drag, ultra-high temperature and high mechanical stress tolerance, in a mix that will greatly improve a system's total fuel efficiency. ARV is designed for slightly over 400 flights per vehicle. Current reusable launch vehicles has a reuse rate per vehicle of about 10, so the cost savings implications of the ARV are enormous.
Mr. Mbamalu also added, "The ARV is highly mission specific configurable, considering factors such as orbital altitude, inclination and payload mass to orbit, eliminating "wasted capacity" and maximizing reusability."

ARC's business approach includes licensing its IP to interested companies, although it is open to pursue other avenues. The impact of ARV's patent is enhanced by ARC's patent pending novel propulsion solutions.

The ARV Engine (ARVE) is a standalone propulsion system capable of operating in sustained hypersonic flight environments within the atmosphere. A possible combination of the ARVE with the ARV is a match made in "launch system heaven" and represents potential for decades of market advantage.

Advanced Rockets Corporation was founded with the objective of researching and conceptualizing, protecting and commercializing launch systems and flight technologies. ARC's Othniel Mbamalu has a background in Mechanical Engineering and is the sole Inventor of all Advanced Rockets Corporation's technology patents. Mr. Mbamalu has led ARC from its inception, overseeing all key technological, financial, administrative and strategic decisions thus far.