MDA has been selected by the Canadian Space Agency (CSA) to provide a conceptual design of a lunar rover for science exploration and to prepare for human missions on the lunar surface. As part of MDA's concept, the rover would be engineered to travel up to 600 km over its lifetime in the harsh lunar environment via tele-robotic control and advanced autonomous mode, relying on artificial intelligence controlled from the proposed Lunar Gateway and from Earth. The proposed lunar rover concept would conduct expeditions on the far side of the moon near the South Pole region using a robotic arm and a sample capture system to collect samples, carrying a suite of science instruments up to 120 kg. The rover would then return to its lander and deposit the samples into a small rocket known as an ascent vehicle that will carry them to the Gateway. The samples would later be returned to Earth for analysis to improve our understanding of the moon and the early formation of our solar system to prepare for extended human presence beyond Low Earth Orbit. Advancing science is a major goal of this mission and for the rover, the sample selection could utilize MDA-developed sensors for sample selection. "MDA's innovative robotic solutions have been expanding our understanding of space since the 1980s, with the space shuttles' Canadarms and the International Space Station's Mobile Servicing System, comprised of Canadarm2, a highly dexterous two-armed robotic arm known as "Dextre" and the Mobile Base System," said Mike Greenley, group president of MDA. 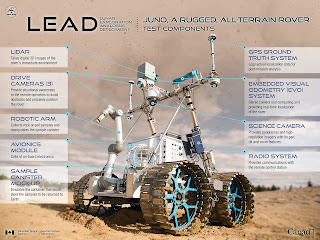 "The development of the Lunar Gateway and lunar rover are critical next steps in deep space exploration, and MDA is proud to support these initiatives and advance Canada's leading position in space."

The rover concept design forms part of a larger study that includes contributions from the European Space Agency, the Japanese Space Agency and the Canadian Space Agency, with the objective of preparing technologies and operations for landing astronauts on the surface as early as the late 2020s. In preparation for these landings, this study will define a plan to land the rover by the mid-2020 timeframe.

Key challenges for the rover include operating during the hot lunar day and cold lunar night, each of which lasts approximately 14 consecutive Earth days. The lunar dust is unlike the dirt and soil found anywhere on Earth and affects moving parts and optical coatings and can be problematic for navigation.