An undisclosed issue brought the countdown clock to a halt 94 seconds before the targeted launch time of 5:53 p.m. EDT (2153 GMT; 6:53 p.m. local time at the launch site in Kourou, French Guiana). The webcast of the French company Arianespace, which boasted more than 3,000 viewers at that point, suddenly went silent as a scrolling banner relayed that the launch was on hold. Few updates followed for the next 45 minutes. But at the end of tonight's launch window — 6:38 p.m. EDT (2238 pm GMT; 7:38 p.m. local time) — the Ariane 5 rose into the dark sky, lighting up banks of clouds shrouding the humid launch pad. The rocket sped into space, first deploying one satellite and then the other. Arianespace mission control at the Guiana Space Center erupted in applause as the second spacecraft successfully deployed around 7:20 p.m. EDT (2320 GMT; 8:20 p.m. local time). "The heavyweight launcher has once more performed flawlessly. Congratulations to all," Arianespace CEO Stéphane Israël said in a speech broadcast on the Arianespace YouTube channel minutes after the second satellite deployment. Israel gave a special thanks to the longstanding customers of Arianespace; the company has launched more than 200 satellites using the Ariane 5 alone. "Ariane 5 is known for delivering, and we are very appreciative of another flawless launch," Ken Lee, senior vice president of space systems for the satellite communications company Intelsat, said after Israël's speech. He joked that the launch did not go exactly as planned, but it was "flawless nonetheless." 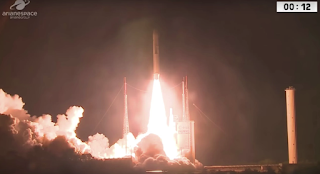 Intelsat is a joint venture partner in both of the spacecraft that launched toward geostationary orbit this evening. These satellites are called Horizons 3e and Azerspace-2/Intelsat 38.

Both spacecraft are expected to improve communications for consumer, corporate and government customers. Horizons 3e (in partnership with Japan's SKY Perfect JSAT Group) is intended to improve broadband coverage in the Asia-Pacific region. Meanwhile, Azerspace-2/Intelsat 38 (in partnership with Azerbaijan's Azercosmos) will host direct-to-home television programs in the Asia-Pacific area, as well as parts of Africa and central and eastern Europe.

Though the first Ariane 5 test flight in 1996 failed spectacularly, the rocket line quickly became known for its reliability (98.1 percent success rate heading into tonight's launch) and payload capacity (the ability to carry 20 tons to low Earth orbit). The rocket is therefore an attractive option for customers with heavy telecommunications satellites.

Arianespace is expecting to debut a successor rocket called Ariane 6 around 2020. One of the major goals of the new rocket will be to significantly reduce the cost of launch services, according to the European Space Agency. In 2014, a typical Ariane 5 launch cost roughly $137 million.
Автор: Jackkat на 6:20 AM