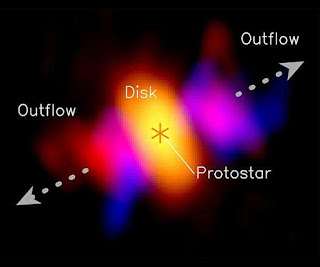 HH 211 is one of the youngest protostellar systems in Perseus at a distance of about 770 light-years. The central protostar has an age of only about 10,000 years (which is about 2 millionths of the age of our Sun) and a mass of less than 0.05 solar mass. It drives a powerful bipolar jet and thus must accrete material efficiently. 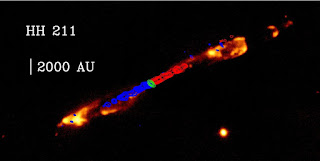 It is a nearly edge-on accretion disk feeding the central protostar and has a radius of about 15 AU. The disk is thick, indicating that the submillimeter light emitting grains have yet to settle to the midplane. Unlike the previously resolved older edge-on disk HH 212 which appears as a large "hamburger," this younger edge-on disk appears as a small "bun."

Thus, it seems that an edge-on disk will grow from a small "bun" to a large "hamburger" in a later phase. Moreover, a compact rotating outflow has been detected, and it may trace a disk wind carrying away angular momentum from the disk and thus facilitate the disk formation.

The observations open up an exciting possibility of directly detecting and characterizing small disks around the youngest protostars through high-resolution imaging with ALMA, which provides strong constraints on theories of disk formation and thus the feeding process in star formation.
Автор: Jackkat на 4:57 AM