The US Air Force's unmanned X-37B space plane has passed its 400-day mark, inching its way toward setting a new flight duration record for the Orbital Test Vehicle (OTV) mission. The spacecraft, the fifth of its kind, was initially rocketed into orbit on September 7, 2017, aboard a SpaceX Falcon 9 rocket, according to Space.com. All previous OTV missions established new flight records, with the fourth spacecraft spending 718 days in orbit. Though details of the space plane are kept on a need-to-know basis by officials, it has been reported that the craft is carrying in its payload an Advanced Structurally-Embedded Thermal Spreader. In August, the space plane was spotted by Marco Langbroek, a Netherlands-based satellite tracker. Langbroek previously told Space.com that X-37B was flying at a very low altitude, somewhere between 193 and 202 miles up. "Basically, only one type of object fits this: X-37B," he said of the craft he observed. "Previous X-37B missions we tracked also orbited at such very low altitudes. The object also has a similar brightness to previous OTV missions." Langbroek works alongside a small group that tracks the plane's path. 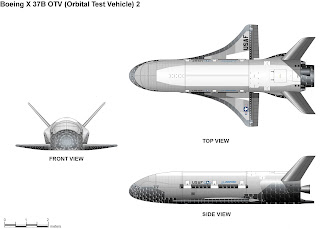 Although it's unclear where the OTV-5 will land once its mission comes to a close, website Space Flight Insider reported that it's likely to land at the Shuttle Landing Facility in Florida, the same location where OTV-4 touched down in May 2017.
Автор: Jackkat на 5:08 AM