The state of the early universe: The beginning was fluid

The particle physicists at the Niels Bohr Institute have obtained new results, working with the LHC, replacing the lead-ions, usually used for collisions, with Xenon-ions. Xenon is a "smaller" atom with fewer nucleons in its nucleus. When colliding ions, the scientists create a fireball that recreates the initial conditions of the universe at temperatures in excess of several thousand billion degrees. In contrast to the Universe, the lifetime of the droplets of QGP produced in the laboratory is ultra short, a fraction of a second (In technical terms, only about 10-22 seconds). Under these conditions the density of quarks and gluons is very large and a special state of matter is formed in which quarks and gluons are quasi-free (dubbed the strongly interacting QGP). The experiments reveal that the primordial matter, the instant before atoms formed, behaves like a liquid that can be described in terms of hydrodynamics. "One of the challenges we are facing is that, in heavy ion collisions, only the information of the final state of the many particles which are detected by the experiments are directly available - but we want to know what happened in the beginning of the collision and first few moments afterwards", You Zhou, Postdoc in the research group Experimental Subatomic Physics at the Niels Bohr Institute, explains. 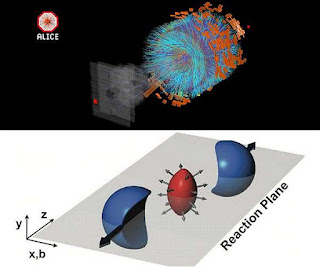 "We have developed new and powerful tools to investigate the properties of the small droplet of QGP (early universe) that we create in the experiments".

They rely on studying the spatial distribution of the many thousands of particles that emerge from the collisions when the quarks and gluons have been trapped into the particles that the Universe consists of today. This reflects not only the initial geometry of the collision, but is sensitive to the properties of the QGP. It can be viewed as a hydrodynamical flow."

The transport properties of the Quark-Gluon Plasma will determine the final shape of the cloud of produced particles, after the collision, so this is our way of approaching the moment of QGP creation itself", You Zhou says.

Two main ingredients in the soup: Geometry and viscosity

The degree of anisotropic particle distribution - the fact that there are more particles in certain directions - reflects three main pieces of information: The first is, as mentioned, the initial geometry of the collision. The second is the conditions prevailing inside the colliding nucleons. The third is the shear viscosity of the Quark-Gluon Plasma itself.

Shear viscosity expresses the liquid's resistance to flow, a key physical property of the matter created. "It is one of the most important parameters to define the properties of the Quark-Gluon Plasma", You Zhou explains, " because it tells us how strongly the gluons bind the quarks together ".

"With the new Xenon collisions, we have put very tight constraints on the theoretical models that describe the outcome. No matter the initial conditions, Lead or Xenon, the theory must be able to describe them simultaneously. If certain properties of the viscosity of the quark gluon plasma are claimed, the model has to describe both sets of data at the same time, says You Zhou.

The possibilities of gaining more insight into the actual properties of the "primordial soup" are thus enhanced significantly with the new experiments. The team plans to collide other nuclear systems to further constrain the physics, but this will require significant development of new LHC beams.

Science is not a lonesome affair, far from it

"This is a collaborative effort within the large international ALICE Collaboration, consisting of more than 1800 researchers from 41 countries and 178 institutes". You Zhou emphasised.
Автор: Jackkat на 5:32 AM