It's been a bad couple weeks in space. A week ago, technical difficulties forced engineers to put the Hubble Space Telescope's science mission on hold. Now, the Chandra X-ray Observatory is in safe mode, too. In a statement released on Friday, NASA confirmed Chandra, one of the most powerful telescopes in space, transitioned to safe mode earlier this week. During safe mode, the observatory's mirrors are pointed away from the sun and its solar panels are turned directly toward the sun. The satellite's most critical hardware is transferred to backup drives. "Analysis of available data indicates the transition to safe mode was normal behavior for such an event," according to NASA. "All systems functioned as expected and the scientific instruments are safe." Engineers are still working to determine why Chandra went into safe mode. As Chandra's Twitter account reminded readers, the powerful X-ray telescope is getting up its in age: "Chandra is 19 years old, which is well beyond the original design lifetime of 5 years." In a separate release, NASA confirmed Hubble is still in safe mode. Last week, NASA and European Space Agency engineers suspended the telescopes' scientific activities after one of its gyroscopes failed. Scientists turned on a replacement gyro, but the backup didn't perform as hoped. 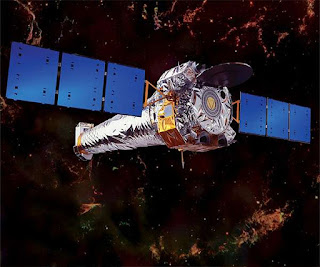 "This past week, tests were conducted to assess the condition of that backup gyro. The tests showed that the gyro is properly tracking Hubble's movement, but the rates reported are consistently higher than the true rates," according to NASA.

Because the gyro is reading rates of changes at a greater magnitude, it can't be used to monitor smaller changes. Normally, when fixed on an observation target, Hubble's gyros operate on low-mode.

"The extremely high rates currently being reported exceed the upper limit of the gyro in this low mode, preventing the gyro from reporting the spacecraft's small movements," NASA reported.

If followup troubleshooting efforts fail, Hubble will be forced to shut down all but a single gyroscope. Previous tests showed Hubble can conduct observation using a single gyro.

Hubble and Chandra aren't the only spacecraft in trouble. Earlier this week, NASA astronaut Nick Hague and Roscosmos cosmonaut Alexey Ovchinin were forced to abort their mission to the space station just moments after launch, ejecting their Soyuz capsule from the rocket and executing an emergency "ballistic descent."

And as NASA reported this week, the Mars rover Opportunity is still silent. Engineers haven't communicated with the rover for four months.
Автор: Jackkat на 1:39 AM