The study of two potential plume sites on Jupiter's moon Europa has shown a lack of expected hotspot signatures, unlike Enceladus where plumes have a very clear and obvious temperature signature, research by Planetary Science Institute Senior Scientist Julie Rathbun shows. "We searched through the available Galileo thermal data at the locations proposed as the sites of potential plumes. Reanalysis of temperature data from the Galileo mission does not show anything special in the locations where plumes have possibly been observed. There are no hotspot signatures at either of the sites," Rathbun said. "This is surprising because the Enceladus plumes have a clear thermal signature at their site of origin, so this suggests that either the Europa plumes are very different, or the plumes are only occasional, or that they don't exist, or that their thermal signature is too small to have been detected by current data." Plumes are jets of gas that are sent upward from a planet's surface, similar to Old Faithful in Yellowstone National Park. For the gas to be shot upward, an energy source is needed. Generally, that energy source will also heat the surface around the plume source, like we see in Yellowstone with hotspots at the geysers and hot springs nearby. This is also what is seen on Enceladus, a hot region where the plumes erupt from on Enceladus' surface. The hot spots at Yellowstone and Enceladus are unmistakable and readily observed. The lack of a hotspot at Europa suggests the hotspots there are very different, if they exist at all. 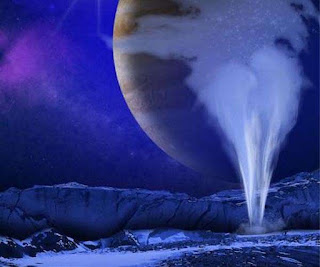 Rathbun's findings, titled "A Closer Look at Galileo Thermal Data from Possible Plume Sources Near Pwyll, Europa," were presented at a press conference at the Division for Planetary Sciences of the American Astronomical Society 50th annual meeting in Knoxville, Tenn.

Rathbun's work follows up on earlier observations that suggested a plume originating from an area north of Pwyll on Europa, and reanalysis of Galileo magnetometer and plasma data also suggest a plume source about 1,000 kilometers northeast of the first site.