An international team of astrophysicists using the Large Millimeter Telescope (LMT) in central Mexico has detected an unexpected and powerful outflow of molecular gas in a distant active galaxy similar to the Milky Way. The galaxy is 800 million light years from Earth. The findings are published in the current edition of Astrophysical Journal Letters. The research team includes Min S. Yun, a professor of astronomy at the University of Massachusetts Amherst, and colleagues from Mexico's Instituto Nacional de Astrofisica, Optica y Electronica (INAOE), the National Autonomous University of Mexico (UNAM) and institutions in Italy, Belgium, Finland, the Netherlands, Germany and Spain. Yun says that the LMT, which is operated jointly by UMass Amherst and INAOE, is uniquely suited for detecting a faint, broad line like this observational result and is designed specifically for this type of experiment. "Understanding how frequently the central supermassive black hole disrupts its host galaxy through a yet unknown energetic feedback process is one of the most important unanswered questions in the study of galaxy evolution today, and the LMT with its full 50-meter surface that was just completed, should yield more insights in the coming observing seasons," he says. Anna Lia Longinotti of the INAOE, who led the research, says "The novelty of this result is that we are seeing feedback in a galaxy where this phenomenon is not expected. 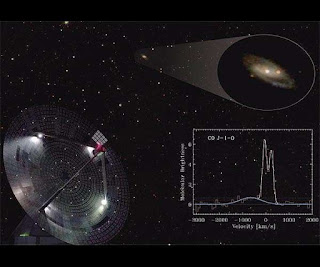 The other two galaxies where it was observed are more dust- and gas-rich, whereas this galaxy is a spiral type, therefore more similar to the Milky Way. This discovery opens the path to explore the possibility that active galactic nuclei (AGN) feedback can be produced also by less luminous objects with different characteristics."

About two years ago, thanks to X-ray data obtained by the European Space Agency satellite XMM-Newton, the presence of ultra-fast outflows of ionized, hot gas at sub-relativistic velocity was reported in this same object, called IRAS17020+4544. These winds are thought to originate in the accretion disk located around the supermassive black hole that powers luminous active galactic nuclei (quasars).

The activity of this type of galaxy is related to the energy released by accretion processes that take place close to the black hole. Despite hosting an active nucleus, this galaxy is considerably less luminous when compared to quasars.

The data obtained with the LMT spectrograph Redshift Search Receiver (RSR), developed at UMass Amherst, reveal that such X-ray ultra-fast outflows co-exist with molecular outflow of cold and dense gas that emits in millimeter frequencies, according to a paper recently published in the journal Astrophysical Journal Letters.

Longinotti explains that the gas detected by the LMT is located within the same host galaxy at a large distance, 2,000 to 20,000 light years from the central black hole, whereas the X-ray fast wind is located much closer to the black hole in the heart of the active nucleus.

She highlighted that among the scientific merits in pursuing observations of AGN molecular gas, one is to corroborate the existence of a connection of accretion disk fast winds and large-scale outflows of molecular gas. "In this galaxy we already had evidence of a wind capable of producing feedback to the host galaxy.

Feedback processes may be the result of large ejection of mass and energy that has the effect of sweeping the galaxy and stripping the gas with which stars are formed. The gas entrained by the outflow travels outward and the galaxy is left without 'prime food' to form new stars. Eventually, the effect of the feedback is that the galaxy turns inefficient in forming stars and it becomes a passive galaxy," she says.

The accretion disk wind observed in X-ray light is launched with a certain amount of energy and force. "Our measurements seem to indicate that the molecular outflow conserves this initial energy while sweeping the galaxy, therefore we do see this connection, and it seems to indicate that the behavior of the black hole, which is responsible for launching the disk wind, has a profound effect on the gas distributed at a much larger scale within the host galaxy. In conclusion, this connection regulates star formation activity and galaxy evolution.

Longinotti says this phenomenon was not expected in objects that are not quasars nor Ultra Luminous Infrared Galaxies, both characterized by having a large amount of molecular gas.

"We knew that LMT technical features routinely allow observation of molecular gas in galaxies but in this particular one we could determine the presence of the molecular outflow, and measure its velocity. Although not as high as those found for the X-ray wind, the molecular outflow velocity ranges between 700 and 1000 km/s, therefore well in excess to the cold gas typically observed in co-rotation in several galaxies."

INAOE's Olga Vega who also participated in the project, highlighted that the LMT is currently the best single-dish telescope to carry out this type of research. She says, to date, the connection of these winds was detected only in three objects, and the other two are 10 times more luminous than this one. Vega says now that the LMT is operating with 50 meters of diameter and new instrumentation is being installed, it is an ideal observatory to search and detect these outflows in other galaxies.

"If the aim is to perform a deeper study, it is necessary to go to interferometry as this technique allows dimensions, spatial distribution and geometry of the molecular outflows to be revealed. Nonetheless, the LMT will have a fundamental role to discover new molecular outflows and thus, to unveil the nature of cosmic feedback and its role in galaxy evolution."

Longinotti says this particular galaxy will be the subject of further multi-wavelength studies making it the first time that such a wide and complete campaign is carried out to advance understanding of the outflow phenomenon.
Автор: Jackkat на 4:09 PM