NASA redesigned and tested a key component for the RS-25 engine that powers the agency's new deep space rocket, the Space Launch System (SLS), by incorporating modern manufacturing techniques that significantly reduce both cost and fabrication time. The redesigned main combustion chamber, which is the heart of the engine, has performed well during two tests in flight-like conditions. During the tests, temperatures reached 6,000 degrees Fahrenheit, and the part experienced 3,000 pounds of pressure as the engine fired up in a test stand at NASA's Stennis Space Center in Bay St. Louis, Mississippi. When SLS launches, four RS-25 engines will produce two million pounds of thrust to help send SLS to space for missions to the Moon and beyond. "We're testing propulsion parts like the main combustion chamber, one of the most complex and critical components for engine operations, to show it can be made less expensively without sacrificing reliability, safety or performance," said Steve Wofford, SLS liquid engines manager. "The SLS rocket will be the most powerful rocket in the world, and these tests show engines can be made with modern manufacturing techniques and still provide the power to safely send astronauts to the Moon." 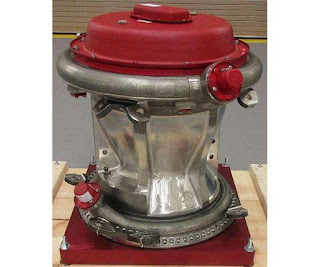 Inside the chamber, the fuel and oxidizer combust and flow through the nozzle, to turn the high-pressure combustion into the 500,000 pounds of thrust that each engine produces. The new chamber design reduces the complexity of the part by eliminating 29 welds. The chamber is made in less time for less money with a bonding technique called Hot Isostatic Pressure - or HIP - bonding. The chamber's internal metal liner and external jacket are bonded together under very high pressures and temperatures.

"The innovative bonding process has reduced the chamber cost and build time by around 50 percent each." said Mike Shadoan, the SLS combustion devices manager for liquid engines. "This series of nine tests allows us to test flight controllers for early missions and at the same time expose parts made with innovative techniques to the same conditions they will see during launch and flight."

Engines for later flights are being built by the SLS core stage engine prime contractor, Aerojet Rocketdyne, at its factory in Canoga Park, California. NASA and Aerojet engineers are working to smartly incorporate today's modern manufacturing techniques not just in the chamber, but also on key components across the entire engine, leading to a host of benefits in cost, schedule and reduced complexity.

During six tests, technicians and engineers tested the first 3D printed part on an RS-25 engine, the pogo accumulator. Aerojet Rocketdyne is under contract to manufacture an initial set of six new engines for future SLS missions. These new engines will be fabricated using the components and techniques that are being validated on development engines during engine tests at Stennis.

NASA is leading a return to the Moon through an innovative and sustainable program of exploration to expand human presence into the solar system. Beginning with Exploration Mission-1, SLS and Orion will demonstrate the critical backbone capabilities that will carry humans to the Moon and farther into space than ever before on a variety of missions with increasing complexity. SLS's unprecedented power and volume will also carry the large pieces of hardware needed to build the Gateway and other long-term infrastructure at the Moon and, later, for human missions to Mars.