Arianespace is present at World Satellite Business Week (WSBW) from September 10 to 14 in Paris, confirming the attractiveness of its launcher family with the announcement of two contracts for Ariane 6: the first with Eutelsat as part of a launch services agreement involving five satellites; and the second with France's CNES space agency and the country's DGA defense procurement agency for the CSO-3 satellite. A third contract also was signed recently with the Indian Space Research Organization (ISRO) for Ariane 5 missions to orbit two satellites. Arianespace's backlog is now 59 launches to be carried out during the coming years, including three on Vega C and five on Ariane 6 - the new launchers slated to make their maiden flights in 2019 and 2020, respectively. Stephane Israel, Chief Executive Officer of Arianespace, will participate in the WSBW roundtable entitled: "Accelerating Access to Space" on Tuesday, September 11 at 4:00 p.m. First multi-launch commercial contract with GEO satellites for Ariane 6, along with its third institutional mission. As World Satellite Business Week opened its doors, Arianespace and Eutelsat announced the signature of a multi-year multiple-launch agreement concerning five satellites to be launched through 2027, making Eutelsat the first commercial Ariane 6 customer with geostationary orbit satellite payloads. For institutional missions, after the two launch contracts signed in 2017 for the European Commission and ESA's Galileo constellation, CNES and the DGA have chosen the A62 version of Ariane 6 (with two boosters) to launch their CSO-3 satellite. These orders clearly reflect the competitiveness and versatility of Ariane 6, which will be available in two versions to handle all orbits and multiple payload configurations under the fairing. 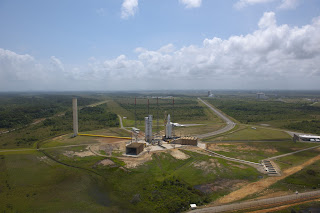 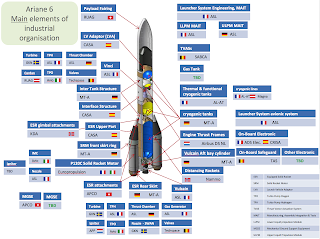 Ariane 5 also confirmed its continued attractiveness, as Arianespace signed a contract with India's ISRO space agency for the launch of two geostationary satellites: GSAT-30 and GSAT-31.

In total, and taking into account the signing of a contract with B-SAT during the first half of 2018 to launch BSAT-4b with Ariane 5 - as well as several contracts for the Proof of Concept (POC) flight of the Small Satellite Launch System (SSMS) on Vega - Arianespace's order book value has reached more than euro 4.9 billion. This corresponds to 59 launches: 17 Ariane 5s, five with Ariane 6, 28 with Soyuz and nine with Vega/Vega C.

With nearly one-third of these launches for the European institutions, Arianespace reaffirms its mission to provide Europe with reliable and independent access to space while also confirming its export success.

A contract also is expected to be signed with the South Korean space agency (KARI) on September 20 in Daejeon for a satellite to be lofted by Vega C.

13 satellites orbited by Ariane, Soyuz and Vega since January 2018

Arianespace has carried out five launches since the start of 2018 for both institutional and commercial customers, clearly reflecting the versatility of its launcher family and services. The 13 satellites launched weighed a cumulated total of 25 metric tons and they are performing communications, navigation, science and Earth observation missions. From January to August 2018:

+ A Soyuz orbited four satellites in SES's O3b constellation, and

Six more launches are scheduled during the remaining four months of the year, with two upcoming missions being highly symbolic:

+ The 100th Ariane 5 launch, scheduled for September 25, will loft Horizons 3e for Intelsat and SKY Perfect JSAT, and Azerspace-2/Intelsat 38 for Azercosmos and Intelsat.

+ BepiColombo, a mission to explore the planet Mercury, for ESA in partnership with the Japanese space agency (JAXA), to be launched by an Ariane 5 on October 19. 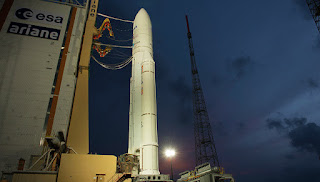 Ariane 6 and Vega C: getting closer!

Development of the new members of Arianespace's launcher family is proceeding apace, with first missions planned in 2019 for Vega C and 2020 for Ariane 6. A milestone took place on July 16 with a successful first hot firing test of the P120C solid rocket motor, which will equip the strap-on boosters for Ariane 62 and Ariane 64, as well as Vega C's first stage. This followed a series of successful tests of the Vulcain 2.1 main stage engine and Vinci upper stage engine for Ariane 6, along with progress toward Maturity Gate 7 (the critical design review) - which is planned by year-end.

European institutions also have reached major milestones in their commitment to Ariane 6 and Vega C. After the European Commission announced its proposed ambitious space budget for the upcoming decade, an ESA Council meeting in June confirmed funding for the transition period between Ariane 5 and Ariane 6. In addition to the four government contracts already signed for Europe's new launchers (three for Ariane 6 and one for Vega C), the commitment of European governments to all missions identified during the transition phase is a key to the sustainable success of these launchers.
Автор: Jackkat на 1:15 AM