'Dust up' on International Space Station hints at sources of structure

Imagine looking under your couch and instead of finding fluffy dust bunnies, you see the dust is arranged in straight lines - you might wonder what caused this order. Scientists are experiencing that same feeling, not with dust under a couch, but with electrically charged dust in the microgravity of space. The dust the scientists are studying is made up of tiny spheres 10 times smaller than the width of a human hair. This dust becomes electrically charged when it collects electrons from an energetic gas called a plasma. In a lab on Earth, electrically charged dust generally lines up either along the downward pull of gravity or across it. Scientists at the Center for Astrophysics, Space Physics, and Engineering Research (CASPER), at Baylor University, got a surprise when examining data from a similar experiment on the International Space Station orbiting 248 miles above Earth where gravity is much weaker. Rather than the dust bouncing around randomly, the dust often wiggled around in straight lines, even without gravity. "Gravity on Earth is at least as strong as the electric forces between the dust grains. In microgravity we expected the dust particles to spread out," said Truell Hyde, director of CASPER, who leads the study. "Instead, we found that the small forces between the dust particles and the atoms in the plasma impose order on the system." Dr. Hyde and his research group are presenting their findings at the American Physical Society Division of Plasma Physics meeting in Portland, Ore. 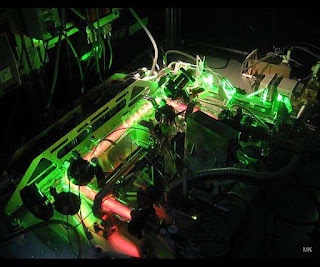 The study was carried out on the PK-4 experiment, short for Plasma Kristall-4, which was built through a partnership between the European Space Agency (ESA) and the Russian Federal Space Agency (Roscosmos). The research is the first project of this kind on the space station with direct involvement of U.S. research groups and is funded by the National Science Foundation and NASA.

Learning that dust grains line up in microgravity is potentially important for understanding how groups of things attain structure. At small sizes, forces between atoms provide structure for molecules and proteins, while at very large sizes gravity provides the structure for stars and galaxies. Hyde said, "This experiment may help explain how structures form when they are between very small and very large sizes."
Автор: Jackkat на 1:45 AM