The Gravity Recovery and Climate Experiment Follow-On (GRACE-FO) mission has resumed collecting science-quality data and planned in-orbit checks after successfully completing a switchover to a backup system in the microwave instrument (MWI) on one of the mission's twin spacecraft. The in-orbit checks include calibrations and other system tests, and are expected to continue until January, when GRACE-FO will enter the science phase of its mission. "The new unit is performing as expected," said Frank Webb, GRACE-FO project scientist at NASA's Jet Propulsion Laboratory in Pasadena, California. "The spacecraft are tracking each other and collecting science-quality data." Both GRACE-FO satellites are equipped with redundant systems in their MWIs, which are their primary measurement instruments. The MWIs very precisely measure the distance change between the two satellites. The switchover to the backup system was required after an anomaly occurred in a component of the primary system. The primary unit was powered down on July 19, when an instrument fault monitor detected that it was using less current than expected. After a full investigation by an anomaly response team, the mission team began a series of procedures required to switch over to the new unit. The backup system in the MWI was powered up on Oct. 19. 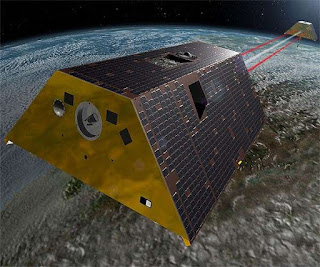 The primary science objective of GRACE-FO - like that of its predecessor GRACE, which operated from 2002 to 2017 - is to track how water is redistributed on Earth by producing highly accurate, monthly gravity field maps.