Aerojet Rocketdyne recently completed qualification testing for the enhanced reaction control thruster system for NASA's Orion crew vehicle, helping to clear the way for the Lockheed Martin-built spacecraft's second test flight, and first mission to cislunar space, called Exploration Mission-1 (EM-1). The reaction control system, or RCS, is the only means of guiding the Orion crew module after it separates from its service module in preparation for atmospheric re-entry and subsequent splashdown. Consisting of 12 MR-104G hydrazine thrusters capable of 160 pounds of thrust each, the system also will ensure that the spacecraft is properly oriented (with its heat shield pointed downward) for re-entry, and stable during descent. Aerojet Rocketdyne employed cutting-edge additive manufacturing processes, also known as 3-D printing, in fabricating the RCS engine nozzle extensions. These 3-D printed components, along with other items on the spacecraft, mark one of the first times in history that a spacecraft carrying humans will incorporate additively manufactured parts. "Additive manufacturing eliminates traditional design constraints, as well as reduces manufacturing times," said Eileen Drake, Aerojet Rocketdyne CEO and president. "Our use of 3-D printing on Orion is just one example of how we are incorporating this breakthrough technology across our portfolio of propulsion products." 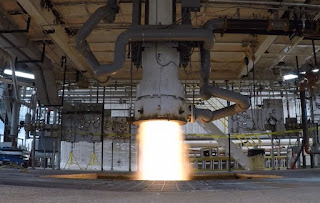 During the yearlong qualification test program at Aerojet Rocketdyne's Redmond, Washington, facility, a single engine was subjected to shock and vibration, exceeding the maximum stresses expected during the upcoming EM-1 launch.

For EM-1, Orion will be launched toward the Moon on the maiden flight of NASA's Space Launch System (SLS) rocket. The non-flight test engine - drawn from the same production lot as the EM-1 RCS flight engines - burned through 619 pounds of propellant during the test program, accumulating 962 seconds of total firing time.

"Following our rigorous qualification testing program, we're confident that this enhanced RCS system is ready to fly," added Drake. "The reaction control thrusters are critical to the Orion capsule's safe return to Earth at the completion of EM-1 as well as future crewed missions."

The EM-1 RCS thruster design builds on the flight proven engine demonstrated on the Exploration Flight Test-1 mission in 2014. The enhanced system features a stronger structure, increased resistance to thermal stresses and reduced mass. The improved manufacturing process updated the system to account for changed loads and to ultimately increase affordability.

On EM-1 an uncrewed Orion spacecraft will launch into a distant retrograde orbit around the Moon before returning to Earth for a splashdown in the Pacific Ocean. It will be followed by EM-2, during which Orion will fly near the Moon with astronauts on board.

In addition to the RCS, Aerojet Rocketdyne is supplying the main- and upper-stage liquid engines for the SLS, and well as the jettison motor that will separate Orion's launch abort system from the crew module shortly after activation of the SLS's second stage.

The company also is supplying the auxiliary thrusters for Orion's European Service Module (ESM), and supported a NASA-led effort to modify a Space Shuttle OMS-E engine, originally built by Aerojet Rocketdyne for its new application as the ESM main maneuvering engine.
Автор: Jackkat на 2:00 AM