NASA delivered a treat with a full-duration RS-25 engine test Oct. 31, and the shake, rattle and roar of the hot fire kept away any eerie creaks and frightful sounds the Halloween day might have had to offer. A team of NASA, Aerojet Rocketdyne and Syncom Space Services operators conducted the 500-second RS-25 test on the A-1 Test Stand at Stennis Space Center near Bay St. Louis, Miss., the fifth hot fire in an engine test series that began in mid-August. The test marked an acceptance hot fire of another RS-25 engine controller for use on a future flight of NASA's new Space Launch System (SLS) rocket, which is being built now to carry humans deeper into space than ever before. The new flight controller serves as the RS-25 "brain," helping the engine communicate with the rocket and controlling engine operation and internal health diagnostics. The recent RS-25 test series also features a 3D-printed pogo accumulator, used to dampens pressure oscillations that can cause flight instability, and an innovative main combustion chamber, fabricated using a new hot isostatic pressing (HIP) bonding technique that saves considerable time and money. NASA has been testing RS-25 engines at Stennis since 2015 to ensure they will perform as needed for SLS, which will be the most powerful rocket in the world. Four RS-25 engines, firing simultaneously, will provide a combined 2 million pounds of thrust to help launch the new rocket. The engines will fire in conjunction with a pair of solid rocket boosters; altogether, SLS will launch with more than 8 million pounds of thrust. 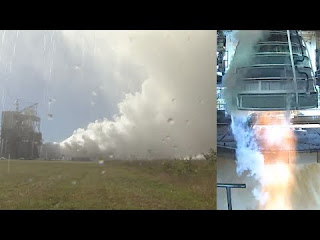 SLS will also evolve to a larger, more powerful rocket, and engines are being modified again to operate at 111 percent of their original power level for additional performance. In addition to its RS-25 hot fires, NASA is preparing to test the core stage for the first SLS mission on the B-2 Test Stand at Stennis.

The test will involve installing the flight core stage on the renovated stand and firing its four RS-25 engines simultaneously, like during an actual launch. RS-25 engines are important for powering the SLS as NASA leads a return to the Moon through an innovative and sustainable program of exploration to expand human presence into the solar system.

Beginning with Exploration Mission-1, SLS and Orion will demonstrate the critical backbone capabilities that will carry humans to the Moon and farther into space than ever before on a variety of missions with increasing complexity.

SLS's unprecedented power and volume will also carry the large pieces of hardware needed to build the Gateway and other long-term infrastructure at the Moon and later, for human missions to Mars. Aerojet Rocketdyne is the RS-25 engine prime contractor. Syncom Space Services is the prime contractor for Stennis facilities and operations.
Автор: Jackkat на 4:23 AM