Small rockets are taking off

In mid-November, a company called Rocket Lab will try to send six small satellites into orbit around Earth -- a fairly banal undertaking, save for the size of the launch rocket. It is only 17 meters (56 feet) tall and 1.2 meters (four feet) in diameter. And if all goes well, the US company will send up more than one of its Electron rockets every month in 2019. Rocket Lab, which was created in 2006, completed a successful test flight in January and is expected this month to be the first of a new generation of companies to declare itself operational in the so-called "small launch industry." The launch window opens on November 11. Barring a mishap, or another delay after a months-long technical setback, the rocket will blast off from the world's first private orbital launch range in Mahia, New Zealand. Like Rocket Lab, dozens of start-up companies are developing rockets adapted to send small, micro or nanosatellites -- which weigh anything from a few kilos to a few hundred kilos (pounds) -- into space. It's a whole new chapter for the "New Space Race," the latest industry revolution begun about a decade ago and based on private, not public, innovation -- especially in the United States. Rocket Lab's creation has a black carbon composite fuselage with "Electron" emblazoned on the side in white lettering. Its engine is produced by a 3D printer in California, a move that helped cut costs, the company's chief financial officer Adam Spice told AFP. 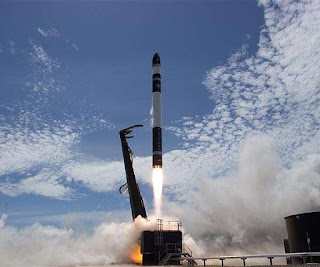 Launching from New Zealand also has its advantages over traditional sites in Florida or California: there are not nearly as many planes in the air.

"If you've got no air traffic to clear, we have the ability to launch more frequently than any other place in the planet," Spice noted.

The company has six Electron rockets in production, and is estimating it will carry out 16 launches next year.

Rocket Lab's plans are not going to be cheap -- relatively, its rocket is expensive on a per-kilo basis.

But it's holding out the prospect of frequent launches that would help resolve the current backlog.

Nowadays, companies that want to put a small satellite into space are only offered spare space in a rocket launched by SpaceX or Arianespace, which are primarily reserved for bigger, costlier satellites.

The two-stage Falcon 9 operated by Elon Musk's SpaceX is 70 meters tall (more than four times bigger than the Electron) and can carry 23 tons of cargo into space (as opposed to a maximum of 250 kilos for the Electron).

But small rockets should help reduce launch wait times from 18-24 months or more, at the bigger companies, to a mere six months.

Customers are ready to pay for the speedy service: the going rate at Rocket Lab is about $40,000 a kilo, as compared with $3,000 a kilo at SpaceX.

"What you have with the small launch vehicles is you get a lot more flexibility," said Rob Coneybeer, an investor in Vector, one of Rocket Lab's competitors.

Other companies in the small rocket sector include Virgin Orbit, Stratolaunch, and Australia-based Gilmour.

Chad Anderson, the CEO of the Space Angels investment network, says there are about 180 companies working on small rockets.

But, he told AFP, there are only about a dozen worldwide that actually have hardware. And even fewer have the necessary funding.

"Maybe there's like half a dozen that are really credible at this moment," the investor said.

The success of those half-dozen firms will help define how fast the New Space Race shakes out.

In 2009, when SpaceX sent its first satellite into orbit, there were about a dozen private space companies, according to Anderson.

Today, there are more than 375 such firms, which have raised more than $16 billion in funding.

The applications for the technology are numerous -- first of all, in telecommunications, and then in Earth observation, according to participants in the second Space Summit organized by The Economist in New York on Thursday.

Obtaining more precise images of Earth, more frequently, would be something companies in multiple sectors would want, from defense to farming, insurance and finance.

Such satellites could help facilitate everything from repairing gas pipelines to assessing flood damage, for example.

SpaceKnow is already using them to count parked cars at Disney World in Florida or the number of swimming pools in Brazil, as well as to observe activity at 6,000 factories in China.

Such data is scooped up by clients on Wall Street, who use it as a new kind of economic indicator.

For all of these services to be accommodated, more satellites need to be in orbit, and thus more rockets need to be launched. Nearly a decade after the creation of SpaceX, the path to space is getting wider.
Автор: Jackkat на 11:27 AM