Spaceflight, the leading satellite rideshare and mission management provider, reports it will launch 12 spacecraft in November from India's Polar Satellite Launch Vehicle (PSLV). Payloads aboard the mission include Fleet Space Technologies' Centauri I, Harris Corporation's HSAT, Spire's LEMUR satellites, and BlackSky's Global-1 microsatellite. 'In addition to securing capacity aboard the launch vehicle, Spaceflight executed the integration of most of the payloads at its Seattle integration facility. The payloads are currently en route to PSLV's launch facility at India's Satish Dhawan Space Center for a launch in late November. "This is Spaceflight's seventh launch with PSLV and following this mission, we will have sent 66 spacecraft to orbit aboard PSLV rockets," said Curt Blake, president of Spaceflight. "We value our partnership with such a reliable launch vehicle provider. PSLV's routine launches enable us to provide satellite developers access to space and meet the growing demand from the smallsat industry." Among the payloads aboard the mission is Fleet Space Technologies' second satellite. The fast-growing Internet of Things (IoT) company's nanosatellite will establish a global network that will connect the world's IoT-connected sensors and devices. Over the coming years, the Australian business will create a constellation of nanosatellites to create a scalable, global network to help connect many of the 75 billion sensors expected to dot the world over the next decade. The nanosatellites will bring mass-scale efficiencies for industries such as agriculture, mining, and logistics by enabling businesses to gather complex, revealing data to improve operations. 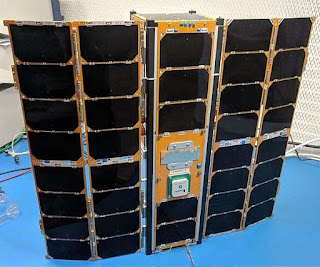 "The launch of our satellite is a huge milestone and we are thrilled to work alongside some of the world's leading space innovators," said Fleet Space Technologies co-founder and CEO Flavia Tata Nardini.

"Spaceflight and launch vehicle providers such as PSLV, are helping to enable frequent and reliable access to space, which will be critical as we continue to build our constellation."

Apart from PSLV, Spaceflight works with nearly every global launch vehicle, including the Falcon 9, Antares, Dnepr, Electron, Vega, Soyuz, and LauncherOne, offering customers the most options for getting to space.

By working with a range of vehicle providers, Spaceflight increases flexibility and provides satellite developers a broad range of launch options should delays occur. Additionally, the smallsat rideshare service model helps organizations reach a desired orbit at a much lower cost than buying their own launch vehicle.

Spaceflight has negotiated the launch of more than 150 satellites on behalf of its customers and has contracts to deploy nearly 100 more through the remainder of 2018. The company plans to coordinate and deploy its largest launch to date in 2018 with its first dedicated rideshare mission aboard a SpaceX Falcon 9.
Автор: Jackkat на 1:26 AM